Transcript of interview with Ken Lacco. The picture shows launch day for Jessamine, with Mitch Lacco standing on a box at the bows. 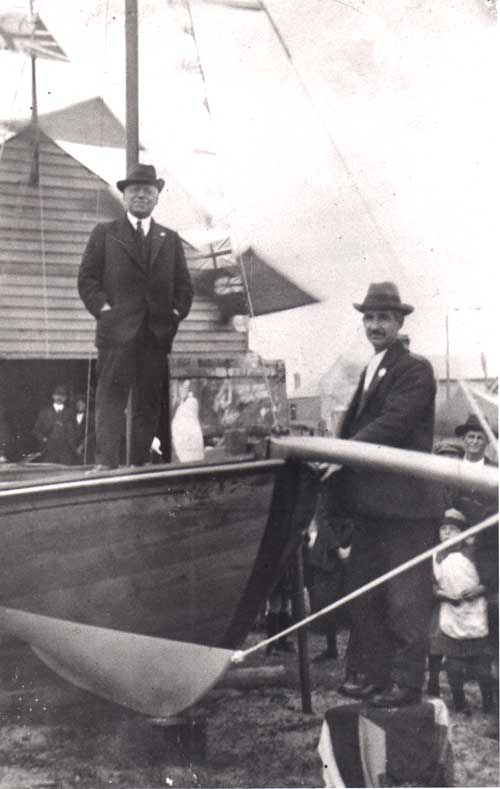 Jessamine was the name of a creeper that grew next door.

My father (Mitch) designed and built the 21 footer, but he built it before they brought the ones out like the Royalist, with the straight bow. He had the round bow on her, like the old type. That was in 1922.

But he just built her a year too soon, as when the boat took off as a class, they built them with a straighter stem

He got first picked in Victoria to race in the Foster Cup (not named after the beer) the next year. Jessamine was alright on the wind, she beat them all around the weather mark, but the others could run and lead much faster then her.

They were a big class at one stage, they were the main racing boats, or even interstate racing class. There were some at the Royal club, and Williamstown and St Kilda. They all had them, and in Tassie too.

The Foster Cup was started up in Melbourne, but fell through quite a few years ago, when the Tumlarens and others came in to being. They were open boats, and I think they had just had their day, and they just faded out. I s’pose that would be the late 30s. Anyway, after the war started, there wasn’t any more.

Dad built the Jessamine only, and if he had won the Foster Cup that year he would have sold her to a doctor in Geelong, but he didn’t win, so he finished up selling it to a chap at Port Arlington. They raised her a plank for fishing, she was turned into a fishing boat.

The scroll at the bows was just a bit of decoration, but he didn’t put that on all his boats.

They were all gaff rig. Just like a fishing boat type, but made better for racing. They had a V coaming for the front of the cockpit. They were pretty low and fast. They had six for crew, and they raced them pretty hard, so this coaming would throw the water off a bit.

Course they’d go all weather. Didn’t matter about the weather, they’d go out. Dad had three sails for the Jessamine. I know he had one with the down cloths. Most of them had the cross cloths, and battens in the sail. But he had a loose footed one with down cloths he used to put on when it was blowing a gale. They’d all have at least three jibs, different sizes. And two spinnakers, you know, for different weathers.

But the newer style that came in after the Jessamine had the straight stem and more raked stern. You’d almost call them ‘cheating’ bows, more or less, where you could put the crew aft and lift the bow up.

But the Jessamine was the only one we built. On a wind she was very very good. I remember being out on her as a boy, and we were running with a fair wind, and had the spinnaker up, and she rolled from one side to the other. She didn’t carry much ballast when racing, but we had big chaps and so on, and we used the crew for ballast.

Dad was a bit of a racer. We were a proper racing family, but the I’ve only got one photo of the Jessamine, and that’s when she was getting christened. The mayor of Queenscliff is standing on the top of her and Dad’s standing on the bottom, and the mayor, he had the Ozone Hotel, is breaking the champagne on her.