Over the last decades of the 19th Century, the type of boat most suited to the fishing and working conditions of fishermen along the couta coast developed fairly rapidly. The square sterned, deeper hulled couta boat became the preferred working craft along the ocean shores, but in a lot of the bays and estuaries such as Port Phillip and Corio bays, some areas of Westernport, Corner Inlet at ports such as Port Franklin and Port Albert, and areas of the Gippsland Lakes, the double ended hull became the fisherman’s better option.

Apart from a draft more suited to typically shallower waters, the double ender was found to be better suited to netting as they were built with less freeboard, which helped when hauling nets and also rowing, and lacked a transom corner on which nets could catch. Also, with a “pointy” stern and usually no spring or camber in the keel, a double ender would not try to turn when hauling nets in, but would track along the line of the net.

“Dugga” Beazley is a fourth generation fisherman at Port Melbourne, and with his son David is still fishing commercially. Although Dugga concedes that his direct experience with the original sailing double enders is a little limited in one way, as he was born during the second world war, he says the timing of his arrival was lucky in another way as he still has a living memory of the sailing fishing boats. Around this time petrol was rationed. “You might leave the mooring with two gallons of petrol, one to get you out and one gallon to get you home. But if the wind came around to a favourable direction of course you’d sail home, because then you’d save that gallon of petrol,” he says. “I can remember quite a few boats sailing up the bay, and a lot of the old blokes would still sail anyway.”

The traditional working rig of the double enders was a standing lug sail, and if a jib was carried it was set on the stem. “I was in these boats with my old man since I can remember,” Dugga says, “but one of my earliest recollections is being in my uncle George’s boat, which he had moored up the Yarra.” George was a lot older than Dugga’s father “Hoppy”, and could remember back to when sailing was the norm. “My uncle told me that in the old days they all had standing lug sails on the double enders, usually with a longer yard on them,” he says. The spar on a lug sail is usually referred to as a yard, not a gaff. There were no bowsprits on the double enders as it would have been in the way when netting. 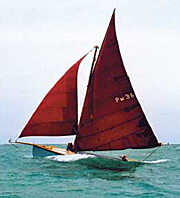 Dugga’s earliest memories of the double enders has them with straight bows and flatter bottoms, clinker topsides and finer sterns than later boats. “The older double enders were virtually the same both ends,” he says.

“The widest part was right in the middle, and the sterns and bows were really the same, with maybe the stem a little higher.” Carvel construction was to become the standard, as it did with couta boats. And later, when engines started to be installed, the boats became fuller aft, as was also the case with couta boats.

Before engines became common it was not unusual for fishermen to row their double enders out to the fishing grounds. “They used to leave the lagoon (at Port Melbourne) and row out to the breakwater off Williamstown, and they might sit there if there was no wind and wait for the hopper coming out of the Yarra to give them a tow.” (The hoppers collected mud dredged up from the Yarra mouth and transported it out to spoil grounds in the bay on a regular basis.) Of course the boats would sail if there was wind, but in any case the double enders were easier to row than many other boats. “Further down into the bay you’d usually pick up a breeze anyway,” Dugga says.

Like the couta boat, the design of the double enders developed to suit the local conditions fishermen found themselves working in. As with all working craft, these boats were built for specific fishing methods and to work certain areas, so some differences became noticeable between otherwise similar vessels – a more pronounced example would be the shorter, beamier couta boats of Lorne, which could be lifted on to the pier but still have good carrying capacity.

The double enders found around Geelong, for example, had a flatter bottom, straight sides and lower freeboard. “They were a lot lower wooded,” says Dugga, “because they used to have to get overboard to bunt the net up when they were seining, so they couldn’t have a big high wooded boat to be crawling in and out of.” (The “bunt” is the bag or cod-end of a net in which the fish are eventually trapped.) “There they were usually 28ft long with an 8ft6ins to 9ft beam, but they were flatter bottomed, because in Corio Bay there’s a lot of shallow ground and sand banks. A deeper drafted boat was no good really down there, as they couldn’t get near the beach in them.”

The Corio Bay double enders also sported a more pronounced rounded bow. “Now the idea of that was when they were using them around Geelong they used to be able to run them up on the beach,” Dugga says. “They’d run their bow up on the beach and they’d drop a big anchor, tie it on the bollard, and start winching in the net.” A boat with a deeper bow would have dug its nose into the sand and be more difficult to get off the beach. “It was normally done with the tide coming in, so by the time they got the net ashore and they’d bunted the net up, the boat would be floating again. And that’s why they’ve got the round bows on them like that. When they finished they’d pull the net back into their dinghy and off they’d go again.”

The Port Melbourne double enders however, had deeper forefoots on them for working out in the bay where the fishermen could often find deeper water and a bigger swell. These boats were mainly used for mesh or gill netting in the bay, catching flathead for example, usually in the daytime and using baited nets. “That’s the thing with working boats,” says Dugga. “They were built for their conditions. You get out in my boats in the bay and they don’t pound or jump out of a wave,” Dugga says. “The other sort can come out of a wave and go down the other side with a crash. But around Geelong you don’t get the bigger swell, it’s just a small chop down there, and not so rough conditions. See, everything was made for a purpose.”

The double enders could therefore be quite different to each other, not only due to locale but even because of the whim of the fishermen who had them built (and some even built them themselves). As with couta boats, if there was a perceived improvement that may give a fisherman an advantage, he would naturally consider giving it a go. One boat would be built and with the next one they would try to improve it, to make it a little better than the one before.

At the top end of the bay, Dugga maintains that there were more double enders than any other fishing boat. “Because they were better boats for the job they did,” he says. “Couta boats came into their own in the bay when longlining was introduced, but that wasn’t until after the 1930s. Before that they were better suited to outside work. But for netting, for commercial fishing in the bay, it was mostly double enders.”

Restored double enders in these modern times tend to sport a bowsprit and rig similar to couta boats. “I put the bowsprits on more or less against tradition,” Dugga says. “When racing I found that I couldn’t compete against the couta boats without a bowsprit. For one thing you can get more sail area on the boat, and balance them up better. But the other thing is that when you’re a bit off the wind, say on a reach or broad reach, with a bowsprit you can get all that sail out the front of the boat. With the jib to the stem, a lot of the time the main would blanket it.”

Back in the days when they were working boats, the double enders carried a simple lug sail. Of course the outcome of the influence of fish quotas on the rig of couta boats is well known, where speed under sail gave the couta fisherman a definite advantage, but in Dugga’s opinion a working fisherman would be better served keeping his rig simple and straightforward. “If tomorrow the world ran out of petrol, and I had to go fishing under sail next week, I’d chuck it all out and put a lug sail back on. Because it’s simple. It’s one rope, to pull the sail up and down. And when you lower it, you just unhook it off the traveller on the mast, unhook the tack, and you roll it up or push it under the deck out of the way. And I’d just put the jib back to the bow, if I had to go fishing in a boat like that. Keep it simple. Easy. It mightn’t be as fast, but you’re talking about safety, not swiftness.”

Below is a video of Dugga at the helm of his double ender ‘Pearl’, passing a yacht that happened to have a video camera. Dave is relaxing on the side deck.

Footnote: In February 2013, Dugga’s son David sadly passed away, aged in his early 40s. David had been continuing the family traditions in true form and fashion. He also leaves behind his mum Francis and sisters Melissa and Karen. He will be sadly missed.
David has a son, named Sam.