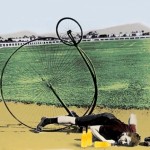 The week-long tour across the north eastern corner of Victoria started off in the alpine region around Bright, but things just went downhill from there – literally. Our trio may have set off with audax aspirations, but after a few days the label “au-dag” seemed more appropriate.

A couple of days into the week we found ourselves camped at Rutherglen, the centre of one of Victoria’s renowned wine regions, and decided to take a “get to know the region” day tour that would also let us leave the tents and most other gear behind (but taking an empty pannier or two, the reason for which will become obvious).

The first leg to the west led through Wahgunyah and took us to our first stop at Corowa, just over the Murray River on the NSW side. The historic town’s claim to fame is the role it played as the “birthplace of federation”, as the decisive meetings in the lead up to 1901 were held there, it being central for many of the delegates. In fact Alfred Deakin usually arrived at these meetings on his bicycle (and he was later to be the only serving Prime Minister to be fined for riding it on the footpath in Melbourne). If you have time, a visit to the Corowa Federation Museum is fascinating.

A little further along the NSW side and Federation Way took us over a bridge back to Victoria, heading for Up River Road. However just a touch south of the turn off is the All Saints Estate vineyard – so naturally a visit to its beautiful castle-like winery was in order. But onwards to the east, and the task ahead was the Up River Road, which is one of those long, flat and very straight country roads that seem to go on forever, but luckily the breeze was at our backs.

Not long after merging with Gooramadda Road, another tempting stop-off is Mount Prior Vineyard, with its 1880s mansion, and of course award-winning wines. Further east and we found ourselves at Barnanwartha Road, and we just decided to hang a left and head over the river again to the township of Howlong for a coffee (marked with a dotted line on our map, as I must admit that this diversion was encouraged by one of our team only so he could keep making a bad joke about “how long” it would take).

Caffeine-enhanced, we headed back south but went off the beaten track along Graces Road and Mia Mia Road, which took us right to Morris Winery. Fortifieds are its speciality (cue panniers).

From there it was west along the Murray Valley Highway (thankfully the breeze had died down, because it would have been head-on). But we were happy pedal-pushers anyway – and for some reason it seems pertinent here to remind you about riding responsibly, as drink driving laws apply equally to anyone on the road.

Two-thirds of the way back to Rutherglen we hit a dilemma – turn right at Great Southern Road to get to Terravinia Vineyard, or keep going a little further and turn left for both the Jones Winery and nearby Anderson Winery. The latter option had the appeal of a “two-for” deal, but we heard later that Terravinia has a working distillery.

Heading back to Rutherglen (and a fitness tip; wine is not an endurance enhancer) we were intrigued by a big wine bottle-shaped structure that must only be visible from that side of town, because we hadn’t seen it until then. Closer inspection found it to be an old water tower that the municipality must have once thought could be used to promote the area’s winery credentials, as they fashioned a top-half of a bottle shape and plonked the structure on top. We later found out that this was done in 1969.

There are more wineries just west of Rutherglen, but we’d had a big day. We were back to where we started, three dags, tired and hot, but satisfied with a great ride and a full day’s winery adventure – and our ride must have tired us out more than usual, as we slept very soundly.