The following letter was written by Les Young to his mother upon learning that he was to be discharged from the army at the end of World War 2. 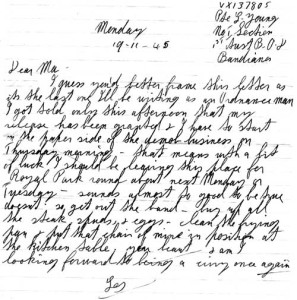 Uncle Les was in Bandiana at the time (November 19, 1945). It reads:
Dear Ma,
I guess you’d better frame this letter as it’s the last one I’ll be writing as an Ordnance man. I got told only this afternoon that my release has been granted & I have to start on the paper side of the demob business on Thursday morning — that means with a bit of luck I should be leaving this place for Royal Park round about next Monday or Tuseday — sounds almost too good to be true doesn’t (it). So get out the band — buy up all the steak spuds & eggs — clean the frying pan & put that chair of mine in position at the kitchen table; you beaut. & am I looking forward to being a civvy once again.
Les