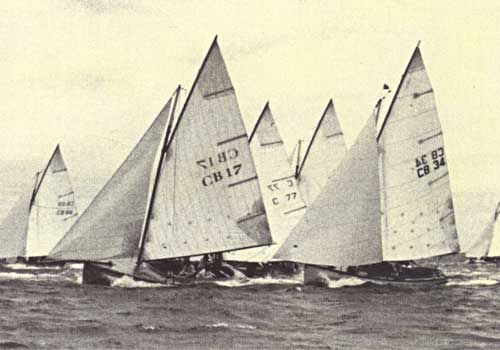 A fleet of old-fashioned gaff-rigged boats is creaming across Port Phillip in tight racing formation. They are an impressive sight with their sails full of southerly breeze, their hulls gleaming with new paint and salt water.

One rarely sees such a sight in these days of high-tech racing yachts whose design owes more to software, wind tunnels and tank tests than to the skills and intuitive eye of craftsmen.

These are couta boats, whose design evolved during the second half of last century to meet the needs of fishermen who sailed out through the Port Phillip heads to chase the schools of barracouta. They needed boats that were roomy, seakindly and fast – to enable them to flee storms or simply get their catch to market quickly to get the best price.

Those same characteristics prized by fishermen make the boats ideal day-sailors and racers for a new generation, who these days are more likely to be highly paid professionals. And their timber hulls and spars have a grace and charm from a bygone era that modern yachts cannot match.

Fleets of couta boats operated from the southern end of Port Phillip and other ports along the Victorian coast until early in the 20th century, when the arrival of marine engines lured fishermen to powered craft. The old sailing craft were largely forgotten until interest in them revived in the 1980s.

Peter Hannah, president of the Couta Boat Club over much of the 1990s, says the club has about 70 boats on its register and about 200 members, although he adds that the boats attract as many enthusiastic hangers-on.

He says keeping a couta boat in racing trim requires a high level of commitment – and money – and that restoring an old boat can end up costing more than a new one. “People who get into these need to be committed in every sense of the word,” he says.

Boatbuilder Tim Phillips, who runs the Wooden Boat Shop in Sorrento, has been a pivotal figure in the couta boat revival. He says it might cost as much as $100,000 to have a new boat built, and agrees with Hannah that restoration can cost more, even though lucky searchers might be able to buy an old hull as cheaply as $1000.

These figures would hardly be believed by the original boatbuilders, people like the Mitch Lacco, who was involved in the development of couta boats as working fishing craft. A fisherman, boatbuilder and sailmaker, Lacco started building boats at Queenscliff in the late 1800s. His first job was a 30-footer that cost the owner £25 – Lacco received £5 for his work.

Mitch Lacco’s son Ken, well into his 80s (he has since passed away), remembers his father building the Muriel in 1917, a couta boat that belonged to various fishermen before finally being delivered to Phillips for restoration. The Muriel is more than 90 years old, but Hannah says she is still consistently up with the winners.

The Lacco family has been responsible for passing on a lot of couta boat knowledge to the modern builders. Masthead fittings, chainplates and other hardware items were made as required. “We had a whole set of patterns, and had them cast in bronze as we needed them,” says Ken Lacco. “Tim Phillips has them now.”

So why would anyone spend $100,000 on an eight-metre open boat that is too big to put on a trailer when a comfortable cruising yacht could be had for much less? “You could just as easily ask a vintage car enthusiast why they don’t just go and get a Commodore,” Hannah says. “But it’s not just the historical significance; it is also the varied uses you can get out of a couta boat. You can comfortably go sailing with 10 people, or take the whole family for a cruise or out fishing. And you still have very fast and competitive racing.”

Couta boats do not have to conform to strict design rules, but there are some restrictions. Exotic materials such as carbon fibre are out, the hulls and spars and even the blocks (pulleys) must be made of wood. But the club has made some concessions. Sails may be made of modern materials and the boats must have an engine, more for practicality and safety when racing. There is, of course, no tampering with historically significant boats.

The club holds events through the year, but the biggest day on the calendar is the Portsea Cup, held on the second Saturday in January. “It is as much a carnival as a yacht race,” Hannah says. “The next day we sail down to a nice beach for a picnic. Last time we had about 300 people there.”

One these days, Hannah says it is usual to have eight or 10 crew for each boat. “And everyone has a job to do,” he says. Given that, it is even more humbling to think that in their heyday these boats were sailed by two fishermen, whose long working day could end up with them intent upon winning another sort of race (see item below). The first organised couta boat race was held in Queenscliff in 1884.

In 1987, Phillips bought what was being used as a houseboat on the Moyne River at Port Fairy in western Victoria. Years earlier he had recognised the Thistle (built in 1903) as a fine example of the classic couta boat. The National Maritime Museum in Sydney bought the Thistle as a historical project and commissioned him to restore it to original condition.

Ken Lacco came to the party with advice on how the sails were originally set up and put together, supplying a complete set of plans and notes on the methods used in the days when sailing was a daily necessity. The Thistle is now a permanent exhibit at the museum, and is testimony to the significance, Hannah says, that the couta boat enjoys as part of Australia’s maritime heritage.

Workhorses of the sea

Couta boats were developed to fish off the coast of Victoria, inside and outside Port Phillip heads in the second half of the 19th century. As catches started to drop, the boats had to go further out, looking for crays and barracouta (which gave the boats their name).

The men who sailed from Queenscliff, just inside the heads, and from Portland and Port Fairy in the state’s west, favoured beamier boats that had a greater carrying capacity and a centreboard, which improved handling and made them better for drift fishing. Rigs became more efficient and more powerful, and were distinctive for their tall sails and downturned bowsprit.

Barracouta (known as snoek in Perth and Adelaide) became important to the Victorian fishing industry because they were plentiful and available most of the year. Fishing co-operatives established quotas to help control prices, and it was these quotas that led to the quest for faster boats.

Fishermen would set out at dawn and head through the treacherous Rip (the local name for the bay’s entrance) to the fishing grounds. Once they had filled their quota they would race for home. The first boat in got the best prices.

As efficient and competitive commercial sailing vessels, the couta boats reached their peak at development around the 1920s, after which the switch to power craft and a growing consumer preference for shark began to render the graceful couta boats obsolete.