Some weeks, says Scott Kerr, he will get four or five marriage proposals and, although he has been running gondola cruises on Melbourne’s Yarra Rive for three years, he is still tickled by each proposal. So far his company, Venice on the Yarra, has only one asset – the gondola Venice – but, with demand for his river cruises so great, he is having another built. 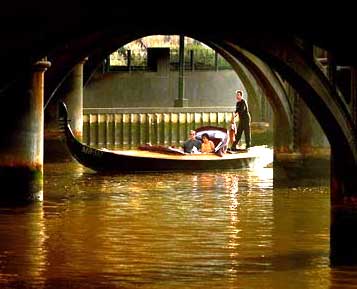 Kerr is not averse to promoting the romance of a gondola ride. On all cruises are a bottle of champagne in a silver ice bucket, a bowl of nibbles on a small table covered with a linen tablecloth and, if needed, rugs and cushions.

Gondolier Kerr pours the first flutes of champagne, presents a red rose and then quietly takes up his oar. “I’m trying to capture a romantic ambience, with the rose, the champagne, the plush velvet upholstery and Italian music in the background – and soft, very subtle lighting at night. I even have a little fold-over canopy now, for shelter or privacy – not that I can see too much anyway.”

Kerr says that when he started the cruises a lot of people, especially younger couples, “might get in the mood for a cuddle, have a quick look over the shoulder and then the canopy would come over”. He now says in his introductory spiel that he cannot see or hear much at all from his rowing position.

His typical customers are “normally 20-something”, but the 70 to 80-year-olds are close behind. They are also mostly Melburnians, and interstate people count for more than overseas. “But they all love the whole experience,” says Kerr. “You can sit out there on a summer’s night, drinking champagne, listening to the music, gently going along. The city will be lit up, and you drift past Southgate, where people are out eating, drinking and having a good time. And there’s the casino. There’s so much to see and do. People have actually said to me, ‘This is one of the great boat trips of the world’.”

Kerr says there is a lot more style about the Yarra now and the city is looking better from the river. Some of Melbourne’s bridges, although plain on top, have beautiful steel arches underneath and so, he contends, have more of a Venetian feel about them. “If the tide’s up I even have to duck sometimes,” he says. Most of his business is in the evening and sunset is the most popular time.

He also offers meal cruises, the dishes being delivered five minutes before departure from one of the restaurants in the Southgate complex. They are eaten on board as the gondola makes its way along the river.

For all its romantic appeal, Venice on the Yarra was not a huge success when it started out. “Business is so seasonal,” Kerr says, “but, even if that were not a problem, I just find that I can’t take care of every aspect of the business myself.”

He is having another gondola built “because I’m turning people away in droves”, he says. On Valentine’s Day, “I could have filled five boats, non-stop, all day”.  The second gondola, built at the Wooden Boat Centre in a converted cargo shed in the Docklands precinct, where Venice was also built, will enable Kerr to carry more people. The only thing that had held the business back was a lack of passenger capacity, he says.

“Even though I’m not raking in the money, it’s a nice business to be in,” he says. “People are always happy, because they are celebrating. They’re either getting engaged, or it’s their birthday or wedding anniversary – or they’re just in love. Those sort of people are always very nice to deal with.”

Kerr, who says that in three years he has not had one customer complaint, finds that the frustrations in the gondola business have more to do with legislation than logistics. Parks Victoria will not allow more berthing spaces along the riverbank, so when picking people up or dropping them off, he can only tie up for a few minutes.

Venice shares whatever space is available with many other riverboat operators, usually the big bus-like ferries that carry more than a hundred people. He has to pay exactly the same licence fee as they do. Operators are not allowed to display a sandwich board to advertise their services or spruik for business and they can only accept money when on their boats.

Even the launch of his gondola enterprise ran into red tape. It took months to get Venice “into survey” (the nautical equivalent of a roadworthy) because the Marine Board had not had to consider such a vessel before.

Kerr got going through his own savings but later had help through the federal government’s “new enterprise incentive scheme”. He says: “The NEIS was designed to help unemployed people who had a fully developed business plan, which they tested. They chose 25 out of 600 hopefuls to be trained in small business practices and I was one of them.”

The plans for his gondola were first drawn in the 18th century. He got a copy from a maritime museum in Venice and then a naval architect in Australia redrew them to include Marine Board specifications, which include safety features such as buoyancy compartments and stability standards.

Kerr’s other concession to modern times is a small electric motor. “People underestimate the power of the old Yarra River,” he says. “When you get a spate of rains and combine that with the effects of the tide, the water can surge along at quite a rate.” The one-horsepower motor helps him deal with the current and is there as a backup to ensure that he can get his passengers home safely or if he is running behind schedule.

The quiet motor does not interfere with the background music. Kerr does not know the words to O Sole Mio anyway, but Luciano Pavaroti did. “I haven’t got a good voice, so I leave the serenading to the CD player,” says Melbourne’s gondolier.