“Many go fishing all their lives without knowing that it is not fish they are after.” Henry David Thoreau.

Alan Trounson usually found it impossible to get a colleague from the United States, stem-cell research pioneer Irving Weissman, to come to Australia; not from reluctance but because of an overloaded work schedule. “He’s one of the best-known scientists in the world, but then I found out he is a keen fly fisherman,” Trounson says. “I sent him a note saying that I was really inviting him to go fishing. He could maybe give a talk, but then we’d go fishing in New Zealand; and he jumped at the chance.”

Trounson is the professor of stem-cell sciences at Monash University in Melbourne, and directs the Monash Immunology and Stem Cell Laboratories, one of the centres at the forefront of stem-cell research worldwide. Aged 61, he is very familiar with the hold that fly fishing can have. “It’s that sort of incredible fetish that we’re probably more used to seeing among young girls with horses,” he says. “Fly fishing can take that sort of emotional input. It can become an addiction.”

His own addiction started many years ago on the shores of Lake Canobolas in Orange, New South Wales, where aged not much over 10 he caught his first fish on a fly with his father. Trounson has come a long way from then, but his love of the sport is as strong as ever.

But his work keeps him very busy, and it is difficult to find the time to go fly fishing. Stem cell research is a hot topic and its findings crucial to so many enterprises, not just medical applications.

“With this we’re working globally and setting up new (research) centres,” he says. “Really this is stuff that keeps you working at weekends and at night, and you find that it can be pretty quick to go through a year before you realise that your head hasn’t come up — that you haven’t had the fishing rod in your hand in all that time. That can be an empty feeling.”

Steve Williamson is a fishing guide, and runs Trout Fishing Adventures out of Jindabyne in the Snowy Mountains of NSW. He sees his fair share of what he calls “high-pressure corporate types” escaping up to the mountains, and says that the one constant he notes about the sport is its engrossing nature.

“When someone is fly fishing, they are totally concentrated. It seems to be one of the few sports that you can get so deep into that there’s no room to think about anything else — your mind can’t wander back to the office,” he says. “With other types of fishing, like if you’re soaking a worm, you can sit there and read about the world’s tragedies if you want to. You can’t do that when you’re fly fishing.”

The unique difference in fishing with a fly is that the angler does not use a hook baited with a worm or other tempting morsels, but casts a hook that has bits of feather, fur and yarn tied to it, made to represent the natural food the trout will be hunting for. 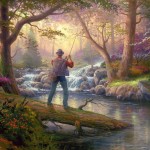 The artifical fly can vary greatly depending on location, the time of year and even local weather conditions, and can range, depending on the season, from representing flying insects that may fly near to or land on the water surface, to their larvae stage when they live under the surface — represented respectively by dry flys and wet flys.

Most fly anglers will agree that it is not just about catching a fish. Fly fishing, apart from being mentally relaxing and conducted usually in pleasant surroundings, appeals to the environmentally conscious as well, as the method is less harmful to the fish, and many anglers return their catch.

Ric Innes of the Compleat Angler Group is reluctant to make too sweeping a generalisation, but contends that in his experience the average fly fisherman will try not to disturb the natural environment of a river or lake, and leaves little telltale evidence — no hooks or pieces of line lying about, no empty stubbies nor cigarette butts. “It’s the pursuit, not the catch, that is important,” Innes says.

“These days the mind-set is more catch-and-release, and all that goes along with that. You’ll find the fly fisherman will be the one carefully stalking his fish, trying not to make a big impact on the surroundings.” Innes says he finds that people can be drawn to the sport by this aspect. “They see other blokes fly fishing along the sides of rivers, and it looks so calm and pleasant. It can be a very relaxing, artful passtime.”

The prominent American fly fishing writer Robert Traver, when asked why he loves to fish, said it was “not because I regard fishing as being terribly important but because I suspect that so many of the other concerns of men are equally unimportant — and not nearly so much fun”.

And it is the appeal of getting away to fish, “the other important thing that I do” as Alan Trounson puts it, that keeps drawing him back to mountain streams or lakes, not so much to rekindle but to relive the joy of casting a fly to a wild trout.

“At university I used to go down to the Geehi River (in the Victorian alps) with friends, some from Melbourne University and some from my own uni, the University of NSW. Fishing and the Geehi became one of our escapes,” he says. “At night, or when it rained and we couldn’t get back across the river to the cars, we’d spend the time making flys and tested them out when the river dropped. The joy of catching fish on your own fly is something extraordinarily special,” Trounson says, “that you have actually fooled a wild fish into taking an invention of yours.”

Trounson contends that some of the most magic moments in his life were spent this way. “There’s something wonderful being outdoors, on a river, and just fishing. You can do it all day and not even catch anything, and still feel sublime. There’s not many passtimes like that.”

When an opportunity presents itself to wet a fly, Trounson is more likely these days to head for somewhere closer to home, and has joined a club that allows him access to a series of pristine lakes near Ballarat, Victoria, no more than an hour from his home.

“Dodgers Trophy Waters was stocked with trout about 20 or 30 years ago, and then it was never fished,” he says. “It is fed by a spring and is very fresh and has a lot of fly life on it. A few of us pay a bit of money, but I can duck down there when I can, and I’m almost guaranteed to catch a nice fish if I go for an evening rise at Dodgers. I can get there in an hour, fish for two or three hours, then go back home and feel very good about it.”

Like many sports, fly fishing is a passtime about which there is always something to learn. “I go to Dodgers myself,” Innes at Compleat Angler says, “and every time I do there’s something else to discover, a thing you didn’t know before. The original organiser of Dodgers, Mick Cole, told me this lake offered rare events such as the best dun (insect) hatches in Australia. Now I’ve been collecting insect life from there for five years, and can match a select brand of flys to insects that live in this area. So I’ve learnt a great deal just from going to this particular place on the map.”

Fly fishing clubs offer an easy way for those interested to get started, and Innes says there is a strong fly fishing club scene, with like-minded members keen to share experiences and knowledge.

“They run events, casting competitions, fly tying lessons. You can learn a lot from clubs. But you’ll always find a lot of people who are into the peripheral items,” Innes says. “Some collect reels, some are only interested in tying flys. I know people who know the latin name of every insect, and their life cycles.” But it is important to remember, he says, to not be put off by the details.

Fly fishing need never be seen as a daunting or expensive sport, Innes says, and his point is backed up by Steve Williamson’s experience. “I was 20 and keen on fishing, and I walked into a tackle shop in Sydney one day and said I was wanted to learn to fly fish,” Williamson says. He was shown a rod, reel and fly line and told it all came to $1500. “So I walked out,” he says.

“Many moons later I tried another shop and the guy said ‘here’s an outfit, not the best but it’ll get you started; $100’. And even today, there are some excellent fly fishing outfits around for about $200, which is all you need to get started.” Williamson says you can even hire an outfit and get a two hour lesson to see if you like fly fishing.

But if time is short, Williamson says that hiring a guide is a great way to learn. “The guide’s experience, over many many years, is related to the angler very quickly,” he says. “For the professional who may only have a few days, a guide can ensure you will catch fish and learn a lot about fly fishing in a short time.”

Getting started
You will need a mid-range fly rod, 5-6 weight, weight-forward fly line, leader and backing, and a better-than-bargain-bin reel.

Learn the moves
Fly fishing clubs offer free casting and fly tying sessions; ask at any good fly fishing shop. If you think a guide is the way, see fishingguides.org.au.