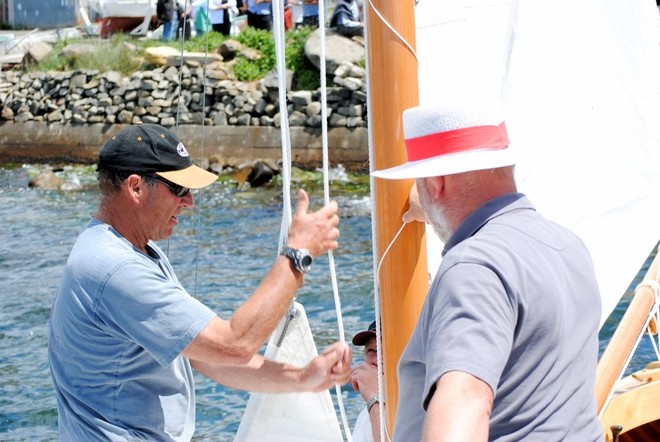 Victoria’s coast is graced with a large fleet of traditional wooden couta boats, with their gaff sails and long bowsprits. Steve Burnham uncovers the creative source of the couta boat phenomenon

The couta boat has come to be an icon for maritime Victoria, and has certainly become an undeniable part of the mix that identifies our state – these wooden sailing boats are so widely viewed as such that a fleet of them were even made an integral part of the river event of the opening ceremony of the Commonwealth Games in March 2006, and helped showcase Melbourne to the world.

These gaff-rigged, timber-built sailing craft can usually be spotted at the southern end of Port Phillip over summer, mostly around Sorrento and Queenscliff, although couta boats can turn up in all sorts of places along Australia’s coast.

Originating from working fishing craft of the 1800s, the couta boat became a victim of the modernisation of the fishing industry after the Second World War, and only survives today due largely to the efforts of a small group of individuals with a keen sense of history and admiration for working maritime traditions.

Regretting the apparent inevitability that these distinctive boats would be relegated to the status of a forgotten footnote to Australia’s seafaring history and vanish into obscurity, a few dedicated people sought out and restored, from the late 1970s onwards, the remaining original couta boats that were either still afloat or propped up in backyards along the coast. Before their renaissance, some were destined for the tip, and one even had to be rescued from a bonfire.

Pivotal to the modern-day resurgence of the couta boat has been boat builder Tim Phillips (pictured above on the left). He is committed to the preservation and restoration of wooden boats and boat building skills, and his Wooden Boatshop at Sorrento, initially a purpose-built site for fixing up old couta boats, has evolved to a complete facility for wooden boat maintenance, restoration and construction.

Phillips still builds boats in the age-old way in timber, and makes them to standards, and by the methods, that have been passed down through craftsmen and fishermen from the hey-day of the couta boat era. Initially a one-man enterprise, the Wooden Boatshop now has a staff of more than 20, and teaches the traditional skills of wooden boatbuilding to a new generation through an apprenticeship program.

Coercing otherwise straight pieces of timber into the sweeping curves of a sailing boat, and fitting them together well enough to keep the water out, is a skill not very common today, and yet staff at the Wooden Boatshop are kept busy all year building not only couta boats but much larger motor launches, which are developed from the very seaworthy couta boat hull type, as well as smaller dinghies. 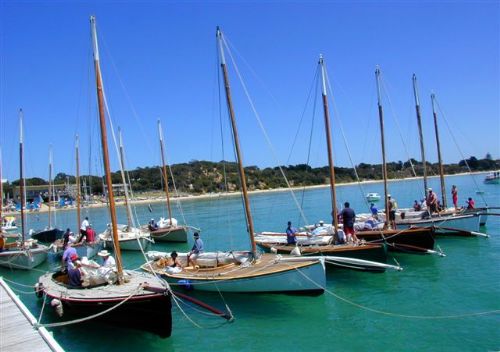 But it is the iconic couta that is a steady guest in the yard, either a new one being built or several that are in for maintenance or refinements.

Looking at the rough sawn flitches of timber stacked at an end of one of the site’s large sheds, it is hard to imagine these thick slabs of wood being turned into the finely fashioned, beautiful curves of the timber sailing craft resting lightly on a neat row of blocks at the other end of the same shed. One could almost envisage that the only thing needed at the Wooden Boatshop is a forest next door to supply its raw material.

“Most of the people that have us build them a boat are the sort that like the idea of a wooden boat but are not necessarily blinded by the arty-crafty aspect of wooden boats,” Phillips says. “In fact, if they didn’t get one of our boats they may well buy a production fibreglass boat.”

But it is that fact, that he is competing successfully with the mass-production market, that is most impressive. Phillips’ one-man show has developed into a commercially viable business that consistently builds only in timber and competes fair and square with modern production concerns.

“What we do here is fair dinkum – we build commercial boats and are competing against fibreglass manufacturers,” says senior boat builder Wayne Parr. “The continuation of that wooden boat building tradition was all but gone, until Tim started the couta boat ball rolling.”

It has all only been possible by Phillips’ determined effort to get back to a point in time when fibreglass and aluminium were not the first choice for boat construction. He has gone back to where the old timers left off, as it were, and restarted the evolutionary process that had been interrupted for decades.

Fellow senior boat builder Mark Abbott, who developed their latest luxury motor launches, says: “It has made a viable industry from something that was forgotten really – that had been left behind.” Although the methods and materials of construction have been a continuation of a tradition that was abandoned, they are committed to the best of technology as far as engines and so on are concerned. “Here we’ve got a boat that is really unique in its traditional construction, but is modern in every other aspect,” Abbott says.

So while there is no carbon fibre and the boats are made of wood, and use wooden blocks (pulleys), the couta boat is not lost in a time warp — there is no need for canvas sails, as the original boats had of necessity, and they all have an engine. There is of course no tampering with historically significant boats, such as the restored couta boats Thistle and Patsy, respectively displayed in the National Maritime Museum in Sydney and Museum Victoria.

“I can’t imagine myself owning anything else but a wooden boat,” Phillips says. “I like the unique vessel that each one is. And I just love that creativity in being able to set up a boat, make all the components, steaming the planks into shape, shaping all the parts to fit. I know every part of it.”

And knowing every piece also means that if any part of a couta boat needs replacing, it can be done with little fuss. A wooden boat could almost be called the ultimate sustainable vessel – parts can be replaced as needed, and the raw material grows on trees. The longevity of a well-maintained couta boat is undeniable; many are still going strong more than 60 years later, which will be a feat modern boats will struggle to match.

That there is a future for the Wooden Boatshop is echoed in the attitudes of its younger staff. Tom Cambridge has been there for five years, and has finished his apprenticeship. He is definitely going to stay on, he says. “Every year we do about six boats, and that keeps all of us busy. A couta boat can take six to seven months.”

His apprenticeship covered every aspect of wooden boat building, and he says if wanted to build himself a boat he would have all the skills he needed, right there in his hands. “And it’s the sort of skill that can go anywhere,” he says. “I’ve talked to a lot of people and they said that what I’ve got now can take me anywhere in the world.”

Vaughan McGillivery has one year to go on his apprenticeship. The 19 year old says: “Tim encourages us to stay on, and there’s definitely a job here for me. And that’s great. More boats are being ordered all the time, and we’re all happy that the work keeps turning up.” Standing next to a brand-new huon pine couta boat, chisel in hand, he adds, “Tim gave me this boat to work on”, like it was a gift, not a chore.

Certainly the cost of a couta boat can limit ownership to either those who can afford it, or to the more affected enthusiast who may dedicate more time and money than they should to their passion. To have a new couta boat built, with all you need to sail away, will set you back around $110,000, so these days the hand on a couta boat’s tiller will more usually belong to a successful professional than a humble fisherman – people like Amcor chairman Chris Roberts or Max Beck of property developer Becton. Eddie McGuire and ex-federal treasurer Peter Costello were sailing couta boats last summer.

But the couta boat is not about elitism. Blue bloods rubbing shoulders with blue singlets is simply not an issue. The last word on this is best put by Phillips: “No one is really interested about that sort of thing,” he says. “If you can trim a sail or tie off a rope, that’s all anyone wants to know.” 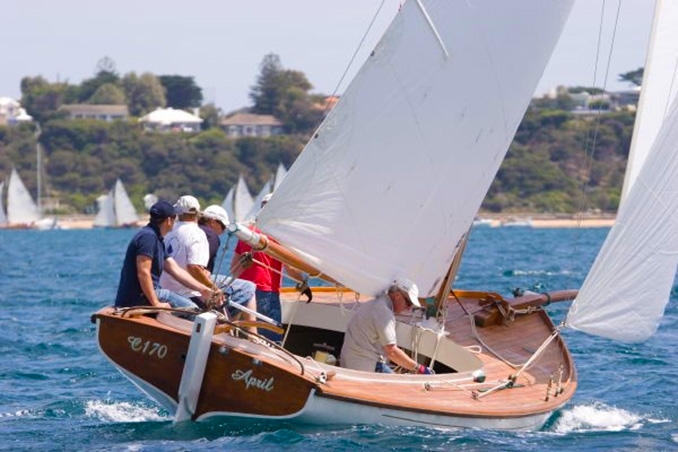 The making of a classic

The couta boat developed for the coastal fishing industry over the later part of 1800s. Fishermen chased such sought-after fish as barracouta (hence the name “couta boat”) but fishing co-operatives established quotas to control prices, and it was this that lead to the added requirement of speed in a good fishing boat.

The boats would head out to the grounds before dawn, most often out through the entrance to Port Phillip, the infamous and often treacherous Rip, which is where the couta boats’ qualities of seaworthiness were proven. Once their quota of barracouta was met, the fishermen turned their efforts to sailing back to port as fast as they could — the first boat back got the best prices.

So while load carrying capacity was important, the need for speed under sail was also a sought-after characteristic. In fact, a rig peculiar to the couta boat evolved, which allowed for sail to be carried a lot higher than was usual at the time, and included the distinctive curved down bowsprit.

As an efficient and competitive commercial fishing vessel, the couta boat reached its peak around the 1920s and 1930s. After the Second World War, the development of engines and the public’s growing preference for shark started to push the couta boat from centre stage. But this working fishing craft’s perfect compromise between seaworthiness, speed and capacity has made it today a quintessential recreational sailing boat.

This article first appeared in the Herald Sun’s “Weekend” magazine.