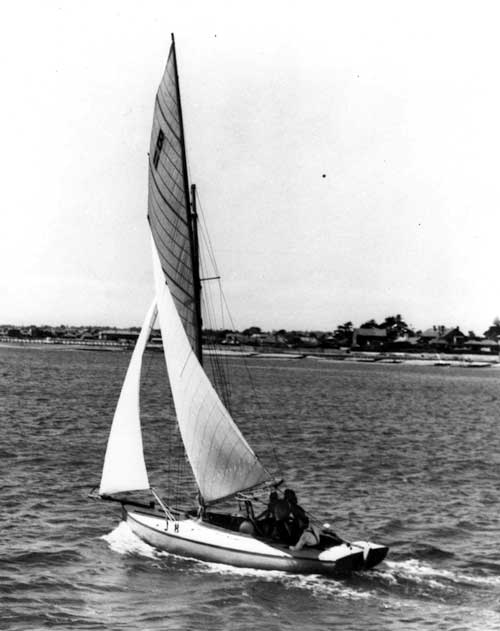 Not very long after the establishment of the class, an article appeared in the respected and widely-read Australian magazine The Australian Motor Boat and Yachting Monthly. In the February 1926 issue, a critical appraisal of the 21s attempted to put into perspective the attributes of ‘design’ of the class, although it should never be forgotten that as a restricted class, the design could vary greatly within the set down restrictions.

As ‘Helm’, the critical alias from 1926, put it: ‘The problem set the designer is to evolve the fastest boat driven by 450 sq. ft. within the restrictions, and as much longer on the waterline as the additional weight of the crew (8cwt) will permit.’

The measurements were made sans crew with regards to waterline length, draught and freeboard, so our critic was making the quite appropriate point that the additional weight of crew was, in his opinion, not put to good advantage in the designs of that time. In theory, they should have been designed, he wrote, as though they had unlimited overhang forward, with the excess cut off short, as it were, and bluntly finished. The point is conceded that this would make a very ugly ‘snout’ and a generally ‘mullet head’ bow, and the writer assumes that ‘it is perhaps the aesthetic eye of the designer that has prevented it being tried’.

The truth was, however, that experimentation with bow and hull shape with regards to getting the most out of waterline length had already been tried. Royalist was designed and built in 1923 for the Royal Yacht Club of Victoria and became the prize of a fund raising raffle. Designer and builder Jack McKenzie was following the lead of some of his Sydney counterparts when he built the boat with a long and low overhang at the bows, ending in the very ‘snout’ alluded to above.

The same magazine in which the call went out for better design early in 1926 had, only four months earlier, described Royalist as ‘generally regarded as a freak boat, by reason of her departure from the ordinary features which it was understood this class would develop’. Royalist had, however, been scooping up a great deal of the prizes in her home waters, and yet it was conceded that she was ‘not the equal of some of the Sydney boats’.

Of course there must have been some limitation to the advantage gained from an increase in weight. The restrictions allowed for a minimum, inside only, ballast of 10cwt, so that the extra ‘live’ ballast from the six crew must have been handy. But the maximum allowed deck length of 25ft must have put a limit on the waterline able to be gained from a heavy crew, and indeed the winning crews as seen in the available photographs do not really appear to be overly heavy (although with six on board and with a cockpit restricted to no more than 42 superficial feet, there must not have been scope for too much dashing around).

Brian Sullivan, who joined the Royal Brighton Yacht Club in 1938, and is an old hand from the 21 footer days, says he remembers that the ideal average weight of crew members was deemed to be 16 stone. Brian says that even then the older club members who sailed in the 1920s contended that even this was too light, and that 18 stone or more was normal, or desirable, in a crew member for a 21 footer. It is interesting to note that Helm’s assumed gain from the crew gives an average weight per person of a little over 10 and a half stone.

Graham Jordon in Adelaide, recalls that Harry Perry, the South Australian Forster Cup champion of 1953 and 1954, had the reputation of being a ‘hard’ man. ‘When his yacht Nerana was at her peak, Harry had any number of men keen to crew on his 21-footer,’ Graham says. ‘So on race day Harry would select his crew with the aid of a set of scales. If the day was expected to be light, he would select the five lightest applicants, (but) if the day was heavy – well, if you didn’t hit sixteen stone you didn’t even get to try the scales.’

Our 1926 critic also discusses the sails used at that time. Again it must be remembered that the sail type was very much up to the sailor, as the only restriction was sail area. ‘The American’ mainsail (long luff and short gaff) is a good one,’ writes Helm. ‘The ‘French’ lug is better, if very peaky, the yard as close to the mast as possible…but the best would be the ‘Marconi’, if well stayed.’

The gunter style of rig seemed to stay in vogue for years, as can be seen from the photo of the 1951 Forster Cup heats (the first picture at the top of the lead article) but it seems that the Marconi or Bermudan rig had been tried years before. That the gunter remained the preferred rig can either be attributed to a stubborness on the part of sailors or to the fact that, with the larger tolerances inherent in the rigging used over this time, the gunter really did perform just as well. Topsy D, by the way, did no better than most of the 1930 fleet, and in fact regained the gunter main after being sold to a Geelong owner (sail number G12 in the 1951 photograph).

Even up to 1948 the Bermudan did not have much of a following. A press report on the Forster Cup trials in Hobart that year says: ‘The Victorian representatives disappointed … Altair proved beyond doubt that within the present limits a Bermudan rig is not suited to this class.’

Daggar type centre plates came in for some tough criticism in 1926, being descibed as ‘the worst feature, totally unsuitable for the type of boat, most ineffective for their area, and cumbersome to work’. By this time, a lot of the boats were experimenting with either the daggar plate arrangement or a swing-plate. Harry Clark says that most of the earlier 21s had plates that swung on a king bolt, ‘like a couta boat’, he says, but a lot had a daggar plate which just dropped down. ‘The Sydney boats came down here with daggar plates,’ Harry says, referring to the Forster Cup races held in Melbourne in 1924. ‘It took two men to work them, one to lift it and another to put the pins in to hold it wherever it was needed.

‘If it wasn’t balanced properly for the point of sailing you were on, you could move the plate to correct things,’ Harry says. ‘You could have it up or down, or on an angle, or whichever way you needed it. Of course off the wind you’d pull it up altogether,’ he says. ‘They didn’t come up too high to get in the way of the boom.’

And in Harry’s opinion, the boats with daggar plates were the best. ‘You could trim the boat for the wind, and with the case a couple of feet longer than the plate itself’ (and in some cases raked aft at the base to give a longer slot in the keel) ‘you could trim according to all conditions. The older boats tended to have the swing plate, but later that became the exception. When the 21 footers really took off, they all had the daggar plates,’ Harry says.